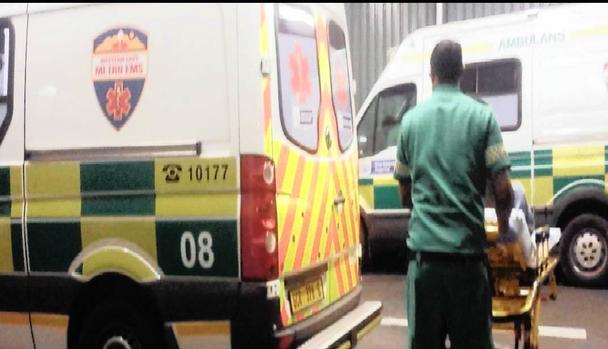 South African paramedics started carrying guns this week – to protect their own lives as they try to save others’ lives.

Early on Friday morning, two Cape Town paramedics were held up at gunpoint en route to the Melomed Hospital in Mitchells Plain with a code red patient in their ambulance – they stopped to attend to a man lying in the road, but it was just a ruse for him to draw his gun and hold them up.

Last week, the president of the SA Emergency Personnel Union (Saepu), Mpho Mpogeng, called on all the union’s 7000 members to arm themselves over the festive season following a spate of more than 30 attacks on members in the past six months.

“Our position is very clear,” Mpogeng told Independent Media on Friday. “We are treating fire with fire.

“We don’t have to be apologetic when dealing with crime because crime will remain crime.”

He said the union had tried to hold talks with the national and provincial departments of health as well as the SAPS but nothing had come of its efforts.

Mpogeng said ever since the union had issued its call there had barely been any attacks on its members.

“It’s happening, our paramedics are arming themselves and going out on duty. This is our only option, we are on our own.

“If government had issued a statement like we did a long time ago, we wouldn’t be talking about this matter now. But they are cowards and do nothing to protect emergency workers.”

The union’s call, though, has been condemned by several quarters of society, including the national director of emergency medical services and disaster management at the health department, Raveen Naidoo, who asked the union to retract its call – which it has refused to do.

Gun Free SA expressed its shock at Saepu’s call. While conceding that more and more paramedics were being attacked, Gun Free SA director Adele Kirsten said arming paramedics was not the solution.

“We know that arming people increases the potential for violence. (A gun) is a good offensive weapon, which is why you would arm your police force or military, but it’s not a good defensive weapon, so all the evidence shows that you increase your risk of being injured or dying.”

Naidoo said they were completely against the idea.

“All health establishments in the country are gun-free zones and EMS is no exception to that,” said Naidoo.

“We have identified and taken steps to address this issue of attacks on EMS personnel but we cannot allow them to carry firearms to work.”

The National Department of Health said while it understood the concerns of workers, it could not condone their arming themselves.

Mpogeng said his members had been warned dockets would be opened against them for inciting violence if they armed themselves. “I don’t think that people protecting themselves is inciting violence. The very same people who are criticising us don’t have the balls to address the issue. I’m sure most of these people know deep down that what we are doing is right, but won’t support us in public,” he said.

Gareth Jamieson, owner of KwaZulu-Natal-based Rescue Care, said he had been carrying a firearm while on duty for some time. “It’s not a nice industry to be in. I carry a firearm with me. And I allow my employees to do so although I don’t encourage it.”

Other paramedics interviewed this week did not support the union’s call. A paramedic in the Western Cape who was robbed on duty and whose life was threatened said: “Using dangerous weapons will only make us a bigger target.”

The two paramedics who were held up in Cape Town on Friday morning were robbed of their cellphones, medical cards, an undisclosed amount of cash and a Swiss Army knife.

Salama Joseph, a manager at the Melomed Hospital condemned the attack. “There seems to be no solution from Safety and Security to protect medics.”