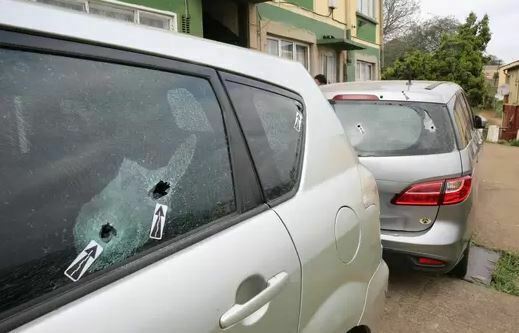 Durban – Two people mourning the death of a relative were shot and wounded in Newlands East on Tuesday night.

Two cars parked at a block of flats on Tandipa Road, where the prayer was held, were riddled with bullets.

Neighbours said the shooters targeted the family of Ncebo Khanyile, who was killed on Sunday.

Police spokesperson Captain Nqobile Gwala said an altercation between two rivals left one man dead and another wounded in the neck on Saturday.

Newlands East SAPS are currently investigating charges of murder and attempted murder. Khanyile was allegedly killed because he owed a man R400.

Last night, just after 8 pm, the Khanyile family had concluded a prayer session when a car stopped outside the flat.

One of the occupants in the car shot in the direction of the prayer group and people standing outside the flat.

A family member living in the upper floor of the flat, who did not want to be named, said they were watching TV when they heard the sound of gunshots. Two bullets struck their lounge window and chipped the plaster off the wall.

The family took cover in the passage. A minute later they heard wheels spinning and the car returning. More shots rang out. Police found two bullet heads in their lounge.

The family were left shaken. It is alleged the shooter could have fired at the wrong flat.

A relative of Khanyile was shot in the foot. A friend was shot in his mouth. Both were treated in hospital.

A Toyota Verso belonging to the Khanyile family and a Mazda owned by the neighbour were riddled with bullets. Bullet holes pockmarked the walls of the flat.

The Khanyile family and the family living below them could not be reached for comment. It is thought they left to live with relatives for the night and had not returned home on Wednesday morning.

On the roadside, more than 12 neon circles indicated where the bullet shells fell. Newlands East police were investigating the shooting.