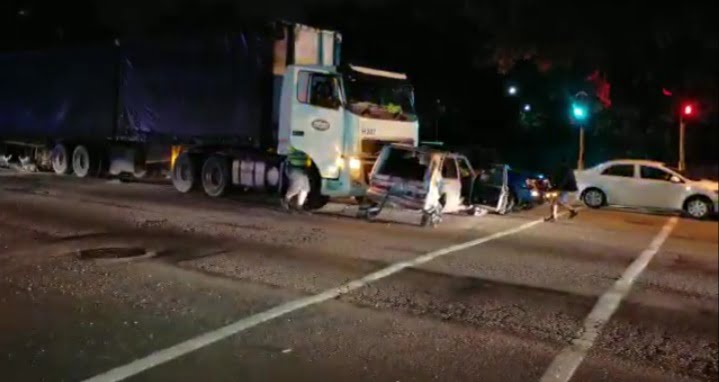 Durban – A truck driver has died in Pinetown while trying to stop his runaway truck before it collided into a residential property on Monday night.

According to paramedics, his truck crashed into at least four cars, including a police vehicle, before crashing into a house.

The truck crashed into two vehicles on the road, before it veered into a residential property where it collided with two cars in the yard and caused significant damage to the property.

Aside from the truck driver who died at the scene, no other injuries were reported in the freak incident that was captured on video with several people expressing shock at the incident.

In the video, the truck is seen crashing into a VW Golf before crashing into a metro police vehicle. The truck the veers down an embankment and into a residential property before coming to a stop.

Life Response paramedics said the accident happened on the intersection of East and Stapleton Road in the Pinetown area.

“The truck collided with four vehicles in the intersection, the driver of the truck got out of his truck and was speaking to metro police.

“When he got back in and tried to reverse his truck, the truck gained momentum going down Stapleton Road pushing the cars with it.

“The truck went down an embankment and into a residential property causing severe damage to the property and two vehicles inside the property,” said Life Response paramedics in a statement.

The paramedics said the truck driver was declared dead on the scene and was not injured by the truck as some have said on social media and on videos captured from the scene.

“Life Response paramedics attended to the truck driver, and attempted to resuscitate the driver, but sadly he passed away.

“Fortunately, no one else was injured in the initial accident or when the truck went down the embankment,” said the paramedics.

Traffic in the area has been severely hampered.

Police are at the scene investigating the cause of the crash.